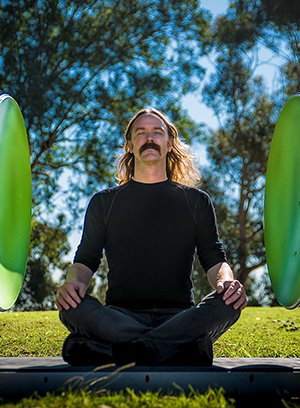 School of Music and Dance, School of Theatre, Television, and Film
cwarren@sdsu.edu

Chris Warren is a sound designer, digital composer, and creator of immersive sonic installations. His exhibits have been featured at NAMM, A Ship in the Woods, and the Havana Biennial and are currently on display at the Fleet Science Center and the Museum of Making Music.

Dr. Warren's extensive research in acoustic measurement has produced EchoThief, a library of reverberation captured around North America. These sonic snapshots can be used to digitally reconstruct a broad spectrum of distinctive acoustic spaces: glacial caves, cathedral domes, abandoned artillery bunkers, and resonant caverns. EchoThief has been licensed to video games including Sony's Days Gone and Bethesda's Wolfenstein II: The New Colossus, and has been featured in museum exhibits, audio production software, and sonic work around the globe.

Dr. Warren performs with the group A Hundred Ghosts whose latest release, Beyond Space, can be heard on all streaming platforms. He is a resident artist at Space4Art, where he also serves on the board of directors. His newest exhibit, From the Sound Up, is a hands-on exploration of sound synthesis where visitors create unique new timbres while learning about acoustics. It will be on display at the Museum of Making Music throughout 2019 and 2020.