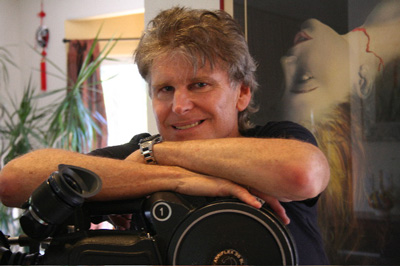 Greg Durbin is a filmmaker and Professor in the School of Theatre, Television, and Film at San Diego State University. His experience ranges from independent film and video production to video art, and includes much documentary and short narrative work. He has worked professionally as a director, writer, cinematographer and editor. Durbin’s work has received national and international recognition. It has been broadcast nationally on PBS and The Sundance Channel, HBO, the Canadian Broadcast System and many broadcast venues abroad. It has also been exhibited nationally and internationally in museums and festivals, including Venice, Amsterdam, Berlin, Stockholm, San Francisco, The Institute of Contemporary Art in Boston, The Pacific Film Archives in Berkeley, and the Museum of Modern Art in New York. His films have won numerous prizes and awards both in the US and abroad, and has been featured three times at the Museum of Modern Art in New York. His short film, Boundaries, won 17 top national and international festival prizes, including 10 first place prizes. Among these was the 2001 Slamdance Grand Jury Prize. His collaborative work with Daniel Boord has also received international recognition. Durbin received a B.A. degree with high honors from the University of California at San Diego, and an M.F.A. degree from the University of California at San Diego in Visual Arts, where he received a full Regents Fellowship. As a graduate student, Durbin edited the milestone documentary, Poto & Cabengo, directed by French director Jean-Pierre Gorin. The documentary received widespread critical attention for its innovative design in both the mainstream and alternative press, and in 2011 was included in the Criterion Collection (Eclipse series). Durbin became an Associate Professor of film at the University of Oklahoma’s School of Art in 1983 where he was head of the Film Program. He moved to San Diego in 1987 to teach at San Diego State University. He also served as a visiting Associate Professor at the University of California Visual Arts Department for four years. In 2001, he was awarded a Fulbright Fellowship to lecture on Film at the University of Barcelona, Spain.