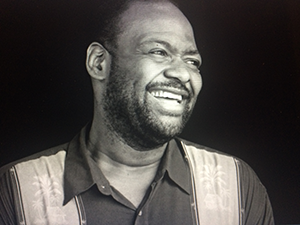 ‘Niyi Coker, Jr. has served as Visiting Artistic Director to several theatre companies including: K3 at Malmo Hogskola in Sweden, the National Theatre of Nigeria and Black Box Theatre in Bermuda. He is the founding Artistic Director of the African Arts Ensemble in New York City. Some of his plays include: Ouray, written in collaboration with the Southern Ute Tribal Council in Ignacio Colorado, and staged with Southern Ute and Native American actors. The play is based on the 19th century struggles of the Utes in Colorado, against European encroachment; Endangered Species, is a play on how racism can complicate family dynamics. It was commissioned and sponsored by the British Council, with a tour of England; Preemptive, a drama on Islamophobia, initially developed at the Indiana University Playwrights lab and staged at London’s West End Shaw Theatre, produced by the British Production company, Z-Mirage. Some of his Off-Broadway writing and directing credits, include, Booth! a musical on Edwin Booths reflections after the assassination of Lincoln (with Barbara Harbach & Jonathan Yordy); Miriam Makeba-Mama Africa –the musical, (with Angela Coker) on the struggles and challenges of anti-apartheid singer and civil rights advocate. The musical first opened in Cape town, South Africa, before touring the USA with an original cast of 40 performers. This musical production was made possible by grants and fellowships from the Carnegie Foundation, and with permission and grand rights license from the ZM Makeba Trust in Johannesburg, South Africa. He is also a recipient of the Washington D.C. Kennedy Center Merit Award for Directing. His documentary film writing and directing credits include, Black Studies USA, which is a history of the controversial creation of “Black Studies” in the USA. The documentary won best short documentary at the Berlin Black Film Festival in Germany in 2005 & Finalist at the Hollywood Black Film Festival in 2007 and Silver Remi Award Winner at the Houston International Film Festival in 2007. His latest feature, Pennies for the Boatman based on Mario Farwell’s “The Seamstress of Saint Francis” was nominated in 4 categories, and won Best Screenplay at the 2012 Madrid International Film Festival. His most recent documentary film Ota Benga – Human at the Zoo, (with Jean Bodon), is the true story of an African kidnapped from the continent and destined for the Bronx Zoo, premiered at the Smithsonian Museum of African Art in November 2015. It won best Director for a Documentary Film at the 2015 London International Film Festival. It also won best Director of a Foreign Documentary Film at the 2015 Nice International Film Festival. Niyi Coker, Jr., is the Founding Director of the Africa World Documentary Film Festival, (AWDFF) which is presently in its 12th season. The festival shows in the USA, Jamaica, Trinidad, Barbados, South Africa, Ghana, Nigeria, Cameroon and most recently in Thailand. He is author of 2 books The Music and Social Criticism of African Musician Fela Kuti and Ola Rotimi's African Theatre: The Development of an Indigenous Aesthetic. He has written numerous book chapters and contributed several articles to Journals and Magazines. He is an Associate Member of the Directors Guild of America and a full member of the Society for Stage Directors and Choreographers SDC. For the past 14 years, he has been the E. Desmond Lee Endowed Professor in Theatre & Cinema Arts, African & African American Studies at the University of Missouri, Saint Louis. Prior to that he has taught at several other institutions including, the University of Alabama at Birmingham, the University of Wyoming, and the University of Colorado at Denver. He holds a B.A in Dramatic Arts from the University of Ife, Nigeria, the MFA in Directing from Brooklyn College CUNY, and a Ph.D in African American Studies (Cultural Aesthetics) from Temple University in Philadelphia.